Beach driving in NC
Get some sand on your tires! Mimi and Clarissa (me!)

There’s something to be said for taking your 4 wheel drive vehicle off the asphalt and onto the sand. Although I’ve lived on the coast since 2002, I’ve never owned a 4 wheel drive vehicle or been graciously toted out there by a friend. As I turned 30 last month, there are many things I’m trying to cross off my bucket list this year in hopes that I’ll feel particularly accomplished.

Myself and 2 other members of the marketing team, Janesa and Mimi, got especially lucky this week at work and were given the opportunity to cross one off of the items on my bucket list WHILE on the clock. (Our job rocks, right?!)

Here’s a visual of “The Point” on Google

It’s the Western tip of Bogue Banks, in the town of Emerald Isle

Maps were disabled by the visitor on this site.

As part of our spring marketing plan, we want to start using more video content to share the sounds and sights of the sea with all of our landlocked friends and fans. I was especially excited when Facebook updated and released the “Live” video streaming for admins of Pages. Translation: This means we can run out to the beach with our phones and stream LIVE video of the beach onto the Bluewater Facebook fan pages. We have been waiting on this for MONTHS. **I know, I know, “months” doesn’t sound like long. But when we really want to share something awesome and technologically cool like a live stream of the waves roaring and 80° sunshine with our fans in Ohio who got snow last week, MONTHS feel like FOREVER.

Since the weather was PRIME – our legitimately 80°+ day this year – we decided to head out as a team to shoot some video and post a live stream for all of our fans. On the way out, Mark (our friendly welcome desk dude) offered to take it one step further and chauffeur us out onto the sand in his Jeep. We were elated! We loaded up the beach chairs and brown bag lunches and headed straight for the Point. Beach driving season ends April 30, so he was happy to get in one more dose of sand on the ‘ole Jeep.

We started the stream right as we entered at the driving access between Carousel and Almond House at the Point and headed across the wide stretch of sand toward the water. 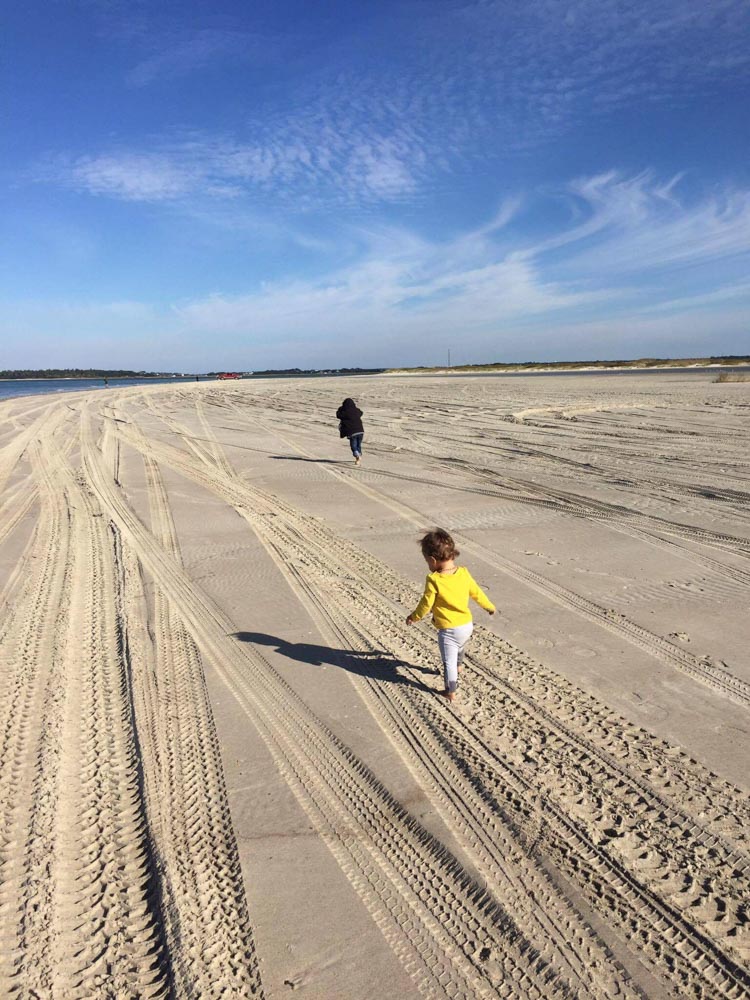 CAN I JUST TELL YOU.

I was shocked at how close to the water he drove!

He explained that it’s actually safer to drive on the sand closer to the water because it’s more packed and firm, and that the soft sand further up toward the dunes is where you’re more likely to get stuck. Makes sense, but it was still crazy to be driving at the water’s edge. I may have been holding my handle a little tight at first. We drove all of the way down to the western tip and then turned around and drove back along the beach to just past the access at Channel Drive and Inlet Drive and pulled over to park.

We lifted the back of the jeep up for shade and proceeded to dip our pasty April legs in the water and eat lunch in the sunshine. By this time there were more than a hundred people watching the live stream. I was so excited!! There were lots of other 4 wheel drive wielding beach lovers (and dogs!) taking advantage of the sun by laying out, fishing, playing cornhole.

When the tide started coming closer and closer to the jeep, we decided it was time to head back to the office. We had shot videos, taken photos and completed two live streams on the real estate and vacation rentals Facebook pages. Mark took us on one more loop up to see the Coast Guard station from the waterside on the way back (again, something I had never seen!) and showed us the inlets that form and fill in as the tide rises. It was really cool to know that we were driving somewhere that would be under water within a few hours. We passed folks who had tethered their boat and were sitting in the sun with a cooler and a set of cornhole boards, just passing the afternoon. We found out later it was actually one of our co-workers! I guess we know where the cool kids work, eh?

I know that driving on the beach isn’t a huge thing to most folks who live here, but to me it was something new and exciting that I have always wanted to try. It seems to epitomize the “island life” and to a former Ohioan like myself, nothing’s better than the island life.

Want to test your 4WD vehicle on the beach?

Check out the full tour